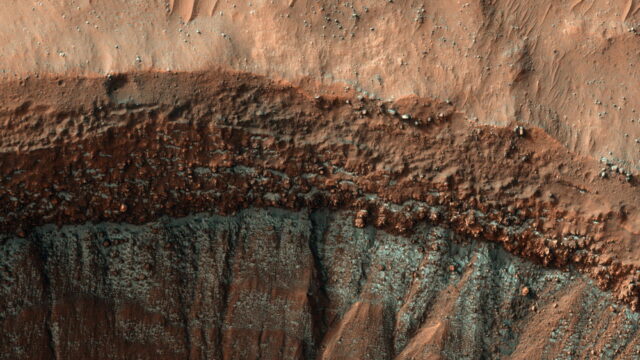 Hello, readers, and welcome back to the last This Week in Space of 2022. As the year draws down to a close, American aerospace — both public and private — has gone as quiet as a winter’s night. So, we’re consoling ourselves with a triple scoop of news from Mars. Climate scientists have used Nvidia’s RTX ray tracing to create a whole new version of the Blue Marble. Thursday also saw SpaceX launch the first of its Gen2 Starlink satellites. The cherry on top? We’ll wrap up with a few words on tonight’s once-in-a-lifetime skywatching opportunity.

Mars is a cold and forbidding place, with barely a breath of carbon dioxide for an atmosphere. It’s winter in Mars’ northern hemisphere, just like here on Earth. And like here on Earth, there is a strange, stark beauty to the Martian winter. In celebration, NASA released a collection of strange and lovely images of wintry snowscapes on Mars.

Winter is cold on Mars. So cold, in fact, that most of the ‘snow’ on the Red Planet is actually carbon dioxide that froze right out of the air in sandy, cube-shaped crystals of dry ice. The atmospheric pressure is so low that snow from water ice seldom reaches most of the Martian surface. Instead, it sublimates away into vapor before it ever touches the ground. NASA explains, “Snow occurs only at the coldest extremes of Mars: at the poles, under cloud cover, and at night.”

Because of how water molecules form bonds when they freeze into ice crystals, Earthly snowflakes have six sides. The same principle applies to all crystals: The way in which component atoms arrange themselves determines a crystal’s shape. In the case of carbon dioxide, molecules in dry ice always bond in forms of four when frozen.

“Because carbon dioxide ice has a symmetry of four, we know dry-ice snowflakes would be cube-shaped,” said Sylvain Piqueux, a member of NASA’s Mars Reconnaissance Orbiter team. “Thanks to the [MRO’s] Mars Climate Sounder, we can tell these snowflakes would be smaller than the width of a human hair.” 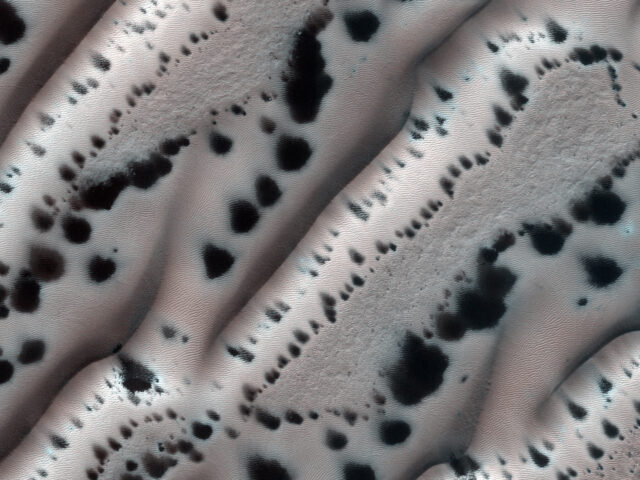 What we’re seeing are spots where gases escape from beneath a blanket of snow. As a puff of gas rises to the surface, it brings along a wisp of fine sediment, which lands in a plume downwind. Scientists have learned to study these plumes, to learn more about Mars’ prevailing winds.

The same phenomenon can create other exotic patterns, elsewhere on the Martian surface. Transparent carbon dioxide ice allows sunlight to pass through and warm the darker sands below. This vaporizes gases buried in the soil. 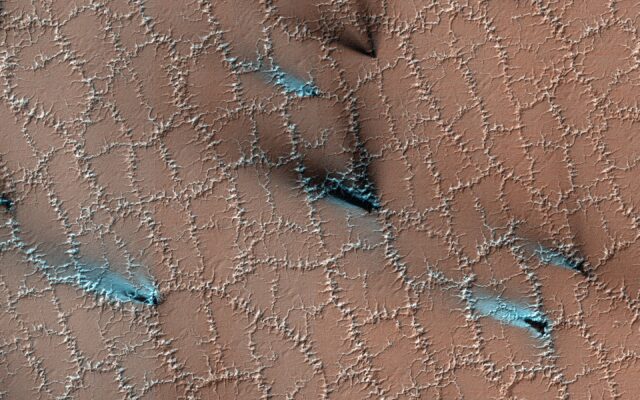 NASA’s HiRISE orbiter captured this image near Mars’ north pole. Here, water ice frozen in the soil has fractured the ground — and the layer of translucent CO2 ice on top — into polygons. Repeated freeze-thaw cycles have deepened the meandering crevices. This image has a finer spatial resolution than the others, just 25 cm (9.8 in) per pixel.

Fresh From the Icebox

Looking like “holiday ribbon candy” (or the worst layer cake), these layers of dusty water ice deposits at the Martian North Pole are several miles thick. We can see the strata because of a trough that cuts into the deposits, revealing individual layers. 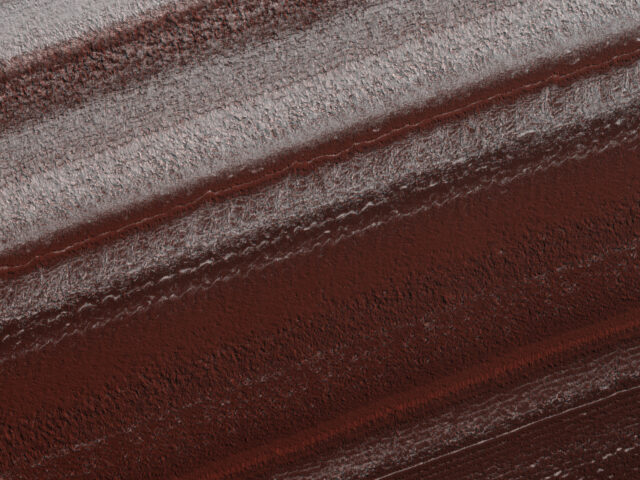 HiRISE captured this image of carbon dioxide frost developing on the poleward-facing slope inside a Martian crater. Because it receives less sunlight, it’s cooler, so that’s where the ice condenses and freezes. 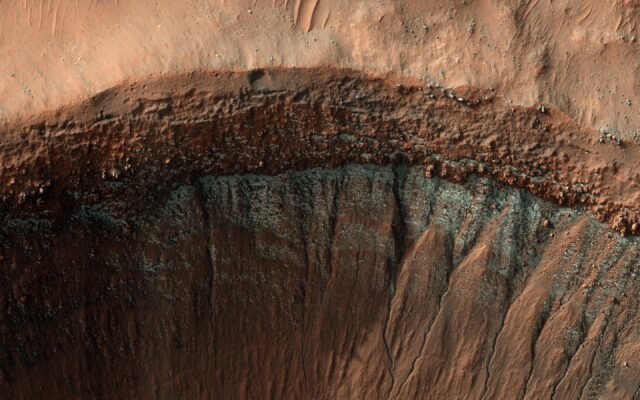 For links to these full-res images and more, check out the JPL’s feature and the MRO team’s slideshow.

Last week, InSight sent home its very last image ever, before shutting itself down for good. Ultra-fine Martian dust struck the killing blow, starving the lander of energy by covering up its solar panels. There’s just something heartbreaking about the idea of everything slowly going dark for the tenacious little lander. Perhaps in response to the final shutdown, NASA has reached out to reassure the public that the ever-present dust poses little threat to the sample tubes its Perseverance rover is caching on Mars.

The wind on Mars is constant, but since the atmosphere is so thin, the wind doesn’t carry much material. So, the sample tubes shouldn’t be in any danger from drifting sand or dust.

After Artemis 1 overshot a critical launch window, NASA and the ESA had to make some tough decisions about the future of those sample tubes. However, they’ve learned a lot from the runaway success of Ingenuity, the little space copter that could. The two agencies recently announced that they jointly scrapped plans to have a big, tanky rover collect the samples, in favor of two space helicopters à la Ingenuity. Turns out it’s ultra-convenient to just opt out of surface obstacles when exploring another planet. This change also obviates the problem of finding a heavy lift vehicle with a body wide enough to cram in a rover the size of a bus.

SpaceX launched its first raft of Gen2 Starlink satellites from Canaveral on Wednesday evening. The new generation is larger and more capable than their first-gen counterparts. However, Gen2 is also distinguished by the orbital shell the satellites occupy, though the first batch of satellites appears to be of the older design.

SpaceX says the Gen2 expansion should ease the network congestion the company has been struggling with all year. Meanwhile, one last Falcon 9 launch remains for the year.

Apollo 17 just had its 50th anniversary. Although it was the last crewed mission we’ve sent to the moon in 50 years, the mission also created the iconic ‘Blue Marble’ image of Earth. Now, in service to the dream of seeing and understanding our world as a whole, climate experts from the Max Planck Institute for Meteorology have created a striking new image that takes the Blue Marble to a whole new level.

The image above was generated with the Nvidia Omniverse platform, using internal RTX ray tracing. But this is no ordinary photograph. The simulation is a fully formed world, featuring details that the Apollo crew’s camera simply couldn’t capture. This fine-scale modeling allowed the team to see beneath the ocean surface, studying the waves of warm water emanating from the African coast and tracking cold subsurface eddies that well upward, warmed by the sun.

Carl Sagan would be so pleased to see this.

This evening, skywatchers are in for a once-in-a-lifetime show. Just after sunset, all of the planets in the solar system (plus the moon!) will be visible in the sky at the same time, stretching out in a great cosmic arc across the southern sky.

Venus and Mercury are in conjunction, less than two degrees apart. Shortly after sunset, they’ll be visible low in the southwestern sky. Binoculars may help to get a clearer view of Mercury, as it’s located in a bright part of the sky, orbiting so close to the sun. By New Year’s Day, fleeting Mercury will have faded back into the solar glare. Meanwhile, Jupiter will graze the edge of the waxing moon with about the same two-degree separation.

Assuming clear skies, you’ll be able to spot Uranus and Neptune with binoculars or a telescope — a rarity all on its own. Neptune takes 165 years to orbit the sun, but Uranus takes 84. Consequently, the two planets spend a lot of time on opposite sides of the sky. This planetary conjunction won’t happen again for longer than it took the Inca Empire to rise and fall. To find Neptune in the sky, look between Jupiter and Saturn; to find Uranus, look between Jupiter and Mars. 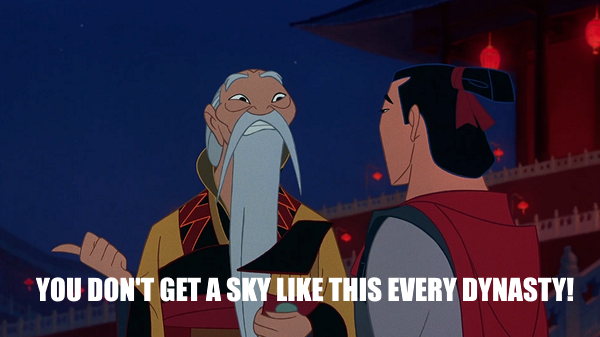 By the way: If you didn’t already know about it, this criminally under-rated widget from NASA’s skywatching page shows the most accurate information we have on the real-time position of dozens of objects like Lucy, Vesta, OSIRIS-REx, Halley’s Comet, and 16 Psyche.

When you click on it, here’s what you’ll see: 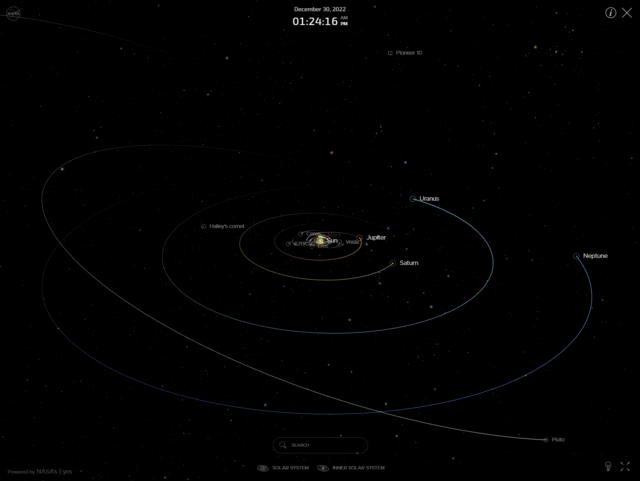 From there, the tracker is clickable and zoomable, and it has all kinds of useful information about the satellites and celestial bodies it tracks. Enjoy it, and we’ll see you in the New Year.