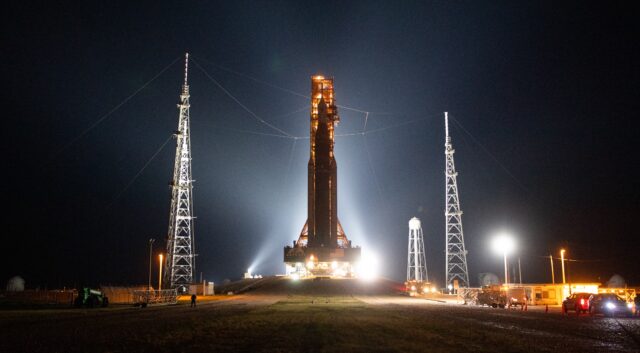 Welcome to This Week in Space: your favorite Friday morning roundup of space news for cool kids. This week, we’ve got a ton of news from NASA. The agency is troubleshooting equipment from here to the heliopause. We’ve also got a report on a rocky “super-Earth” exoplanet just 37 light-years away — that can’t decide whether it’s habitable or not. Last but not least, we’ll wrap up with a word on some great telescope targets for September. Allons-y!

This is quite a busy week for NASA, and it’s not over yet. It’s been playing Whac-a-Mole with problems on multiple fronts. Voyager 1 mission scientists solved one problem, only to discover another. There’s also news from Perseverance about some surprising Martian geology. The agency’s Monday Artemis 1 launch never got off the ground, but they’ve rescheduled for tomorrow — which may or may not be a good idea. 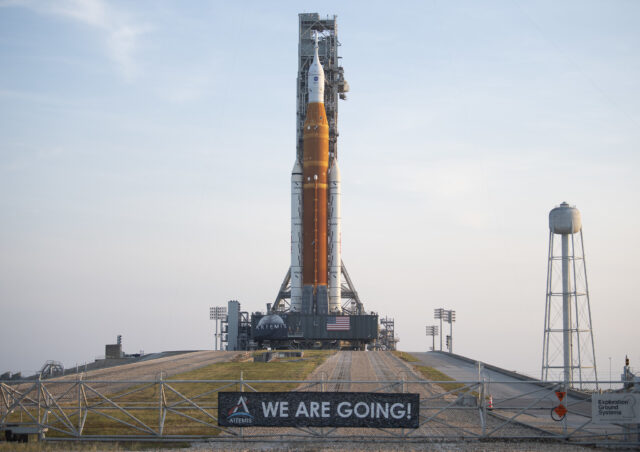 Tensions are rising as the new Artemis 1 launch window approaches. After a botched Monday launch attempt, flight controllers scrubbed and rescheduled the Artemis 1 launch to Saturday, Sept. 3. But NASA has never yet completed a successful fueling test for the Space Launch System rocket — including during Monday’s countdown to launch. In fact, that’s exactly when the countdown ground to a halt: during the part when the flight crew tried to start up the moon rocket’s hydrogen fuel system. Worse, they had to ‘fool’ the flight computer to get through the most recent ‘wet dress’ rehearsal. This raises real questions about whether the rocket is ready to fly. Six years late, and yet it may still be too soon.

The agency will be webcasting the Artemis 1 launch this Saturday on its official YouTube channel, NASA Live. Weather permitting, the launch window opens at 2:17 PM EDT. There’s another backup date on Sept. 5. However, if the SLS doesn’t launch by then, the agency will have to roll it back to the Vehicle Assembly Building. Such a move would delay Artemis 1 until at least October.

Earlier this year, Axiom Space successfully flew the first private space mission to the International Space Station and back aboard a SpaceX Crew Dragon. This initial flight went smoothly in all respects. Now, NASA and Axiom have announced a second mission to the ISS, dubbed Ax-2. The mission will carry four crew members to the ISS for a 10-day stay.

The description in NASA’s blog makes it sound as if Ax-2 will be modeled closely on the successful Ax-1. As with Ax-1, the mission commander will be a NASA astronaut with previous flight experience. Like last time, SpaceX will also be the launch provider for the Ax-2 flight, which NASA projects will take off in Q3 2023. However, unlike last time, one of the four crew members will win their seat by way of the Discovery reality show Who Wants to Be an Astronaut?. 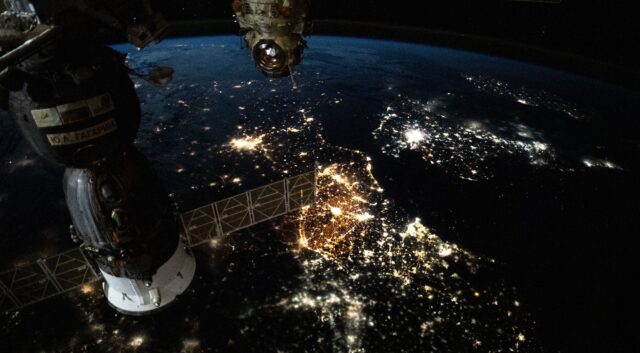 Earth by night, as seen from the International Space Station. Image: ESA/Thomas Pesquet

“With each new step forward, we are working together with commercial space companies and growing the economy in low-Earth orbit,” said Phil McAlister, the commercial spaceflight director at NASA headquarters. “In addition to expanding access to orbit for more people, we are also hoping these private astronaut missions will help the industry learn and develop the skillset to conduct such missions, and NASA is benefitting from gaining additional capability, particularly with returning additional cargo from the space station.”

For the first time, astronomers have used NASA’s James Webb Space Telescope to take a direct image of a planet outside our solar system. Meet HIP 65426 b, an exoplanet less than 20 million years old: 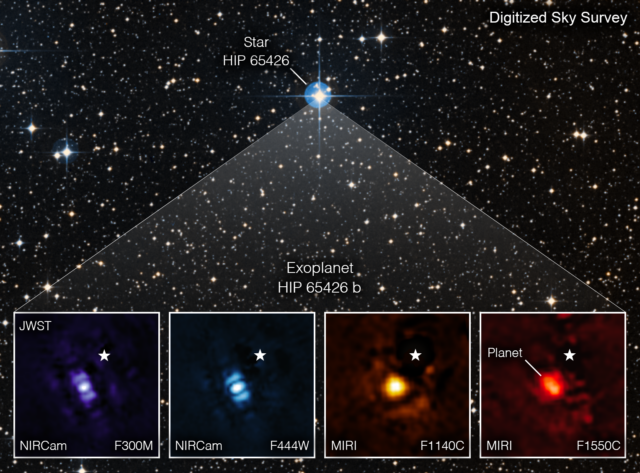 HIP 65426 b is a gas giant, six to 12 times the mass of Jupiter. The four inset panes in the above image show what Webb’s MIRI and NIRCam infrared instruments see, looking at the exoplanet through different filters. Both infrared cameras have a built-in coronagraph, which is a tiny mask that lets astronomers block out starlight. Between the coronagraph and the fact that this exoplanet is about 100 times further out from its host star than we are from Earth, astronomers were able to isolate the fainter light of the planet.

“Obtaining this image felt like digging for space treasure,” said Aarynn Carter, a postdoctoral researcher at UC Santa Cruz who led an analysis of the images. “At first all I could see was light from the star, but with careful image processing I was able to remove that light and uncover the planet.”

New radar images from NASA’s Perseverance rover show that there’s more to Jezero Crater than meets the eye. The rover’s onboard radar uncovered variations beneath the regolith that could indicate ancient, slowly cooling lava flows. They could even hint at a river delta buried below the crater floor, much older than the one Perseverance is exploring today. 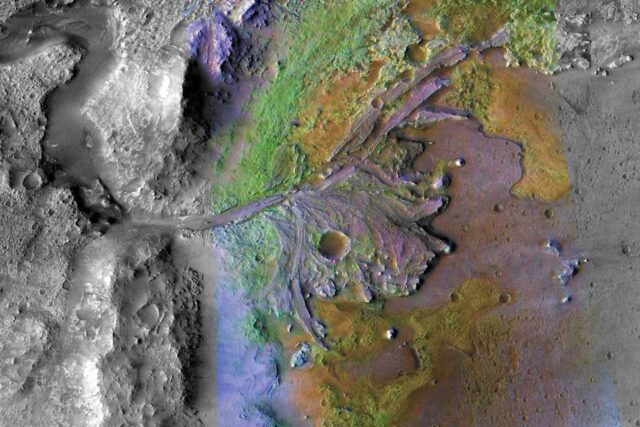 This image from Perseverance’s RIMFAX instrument shows some of the stark variations between igneous and sedimentary rock formations on the Jezero crater floor. Image: NASA/JPL-Caltech/ASU

“We were quite surprised to find rocks stacked up at an inclined angle,” said David Paige, one of the lead researchers on Perseverance’s Radar Imager for Mars Subsurface Experiment, or RIMFAX. “We were expecting to see horizontal rocks on the crater floor. The fact that they are tilted like this requires a more complex geologic history. They could have been formed when molten rock rose up towards the surface, or, alternatively, they could represent an older delta deposit buried in the crater floor.”

NASA announced this week that it has finally solved a problem with Voyager 1 sending back garbled data. Unfortunately, it creates more questions than it answers.

The agency traced the original problem to a fault in Voyager 1’s AACS (Attitude Articulation and Control System). If the AACS stops working, Voyager could lose its bearings and stop pointing its antenna back towards Earth. If that happens, NASA could lose contact with the probe forever.

What’s going on is a bit of a puzzle. The AACS started returning garbled data because it switched to an onboard computer “known to have stopped working years ago.” The solution was as simple as telling the probe to switch back to a still-functional backup computer. While Voyager 1 is now working properly again, the scientists maintaining contact with the probe now have a new question to solve: Why did Voyager 1 switch to using the wrong computer at all?

“We’re happy to have the telemetry back,” said Suzanne Dodd, Voyager’s project manager. “We’ll do a full memory readout of the AACS and look at everything it’s been doing. That will help us try to diagnose the problem that caused the telemetry issue in the first place. So we’re cautiously optimistic, but we still have more investigating to do.”

Volunteers don’t need any training, or any special hardware or software. Anyone, anywhere, can participate with a cell phone or laptop. Here are some examples of what the scientists are looking for:

You can find more information about NASA citizen science at https://science.nasa.gov/citizenscience and https://www.nasa.gov/solve/opportunities/citizenscience.

Solar weather this week has been mercifully quiet. It’s a nice contrast to the last couple of weeks, which have featured several episodes of beautiful — and threatening — space weather. NASA’s Goddard Space Center put together this lovely video of the highlights.

The data here came from NASA’s Solar Dynamics Observatory, captured in the 171-angstrom wavelength of extreme UV light. The agency explains that “this wavelength is particularly good at showing off loop structures in the Sun’s corona, or atmosphere.”

The space weather forecast for the next few days may be less idyllic. SpaceWeather.com reports that sunspot AR3089 has developed “a delta-class magnetic field that harbors energy for X-class solar flares.” NOAA gives the thing a five percent chance to let go while it’s pointed just right to hit Earth. If it does so, we can expect significant radio and GPS interference. We shouldn’t see much interference down here on the ground.

‘Super-Earth’ Can’t Decide Whether It’s Habitable or Not

Red dwarf stars present a unique problem for astronomers. They’re cool and dim, which makes them difficult to see with our deep-sky telescopes. And the problem goes double for exoplanet hunters trying to find a red dwarf star’s planets. Rocky exoplanets around red dwarfs are almost impossible to see. It’s like hunting for a black cat in a windowless room at midnight. However, Japan’s flagship Subaru telescope on Mauna Kea managed to find one: Ross 508, a red dwarf just 37 light-years from Earth. Not only does Ross 508 have an exoplanet — Ross 508b — but it’s a rocky “super-Earth,” perhaps four times the mass of Earth. And the planet can’t decide whether it’s in its star’s habitable zone or not. 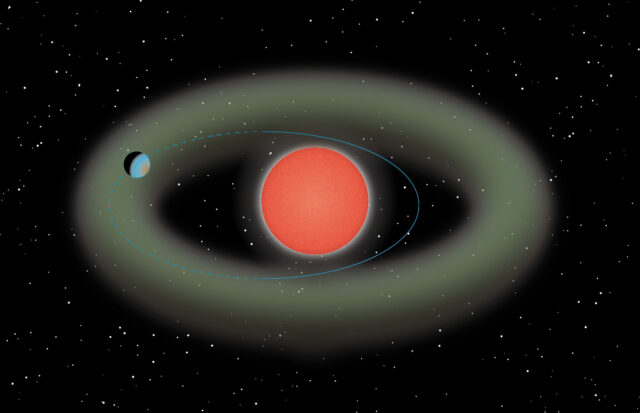 Because Ross 508 is so small and dim, its habitable zone is very close to the star. Consequently, the exoplanet orbits at a breakneck speed, completing an orbit every 11 days. But Ross 508b has an eccentric orbit that dips in and out of the star’s habitable zone. That means it’s only at a temperature compatible with liquid water some of the time. Between that and the radiation from its star, this exoplanet is no one’s idea of a vacation getaway.

A shiny new infrared Doppler (IRD) instrument on the Subaru telescope made this discovery possible. “Ross 508b is the first successful detection of a super-Earth using only near-infrared spectroscopy,” said lead author Dr. Hiroki Harakawa in a press release. “Prior to this, in the detection of low-mass planets such as super-Earths, near-infrared observations alone were not accurate enough, and verification by high-precision line-of-sight velocity measurements in visible light was necessary. This study shows that IRD-SSP alone is capable of detecting planets, and clearly demonstrates the advantage of IRD-SSP in its ability to search with a high precision even for late-type red dwarfs that are too faint to be observed with visible light.”

This month starts out with a waxing crescent moon, which is great news for evening skywatchers because moonlight won’t wash out the sky. You’ll find Mars high in the southern sky before sunrise this month. Likewise, Jupiter and Saturn will be hanging out together in the evening sky all through September. By the end of this coming week, Jupiter and Saturn will form a lovely conjunction with the Moon, shortly after sunset. 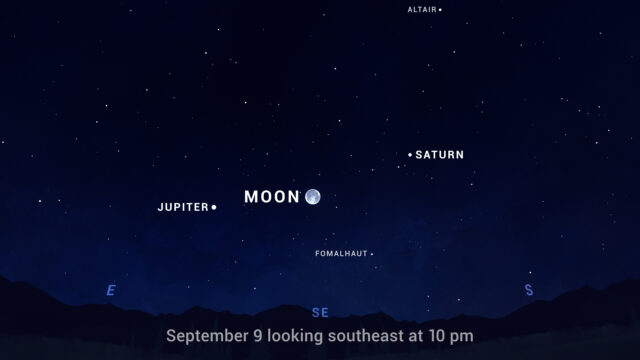 Jupiter’s at opposition this month: on the other side of the Sun, it’s fully illuminated, so it will be visible all night under clear skies. This is also when the solar system’s largest planet is at its best for telescope viewing. With a telescope or a good pair of binoculars, you may even be able to make out four of Jupiter’s moons, visible as tiny, “star-like” points of light around the planet.

That’s all for this week. But we’ll be watching the live webcast of Saturday’s Artemis 1 launch, right along with everyone else, on NASA TV.