Although keyboards have had the same basic features for decades, recently they’ve experienced a renaissance of sorts thanks to mechanical switches. This has led to a wide variety of different typing experiences and custom designs. Plus, with the underground DIY scene, keyboards are now more customizable than ever before. However, there’s still room for innovation, as evidenced by a new keyboard called the Finalmouse Centerpiece that includes transparent keys and switches. Those are necessary to see the high-resolution display embedded beneath. It’s one of those features that we never knew we needed until we saw it in action.

Keyboards have had displays before, of course, but nothing like this. We’re reminded of the Logitech G19, which had a tiny display. There are also keyboards with a small OLED, like the Steel Series Apex Pro. The Centerpiece takes it to a whole new level. Instead of just having RGB light patterns dancing across the keys, you could have Koi fish swimming around, for example. The technology powering it is called Laminated DisplayCircuit Glass Stack (LDGS), according to TechSpot. The keyboard sports a dedicated CPU and GPU to drive the display. It’s also running Unreal Engine 5 as well. It connects to any PC with a single USB-C cable.

The transparent keys and switches have lettering on the side facing you, although it seems pretty hard to read them with video swirling around beneath. But keys without labels have existed for many years, such as those on the Das Keyboard.

The switches were developed in a partnership with Gateron and are based on its BlackInk switch. They’re described as “linear” and are auto-lubed. They differ from Gateron’s switch in that they have faster actuation and different travel parameters. Finalmouse will offer it with an analog switch that lets you customize actuation distances. You can adjust the brightness of the display with a simple knob. 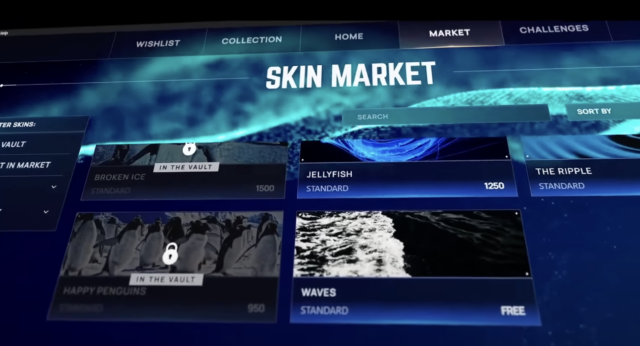 The Finalmouse App in Steam will let you buy and trade skins. (Image: Finalmouse)

The real value seems to lie in the kinds of videos you can display under the keys. Finalmouse envisions a thriving marketplace on Steam: Users will be able to upload their “skins” to Steam, and either offer them for free or charge for them. You can also easily send skins to friends. The keyboard’s memory can hold three skins at a time, which sounds kind of limiting.

The CNC-engraved chassis is made from anodized aluminum, so it’s light yet sturdy. The company says the keyboard can handle all the abuse a gamer can throw at it, which signals that it’ll be protected from beverage spills and other detritus. It’s not cheap at $349, but given its specs and design, as well as the inclusion of both a CPU and GPU, it’s actually not as expensive as we figured it’d be. It would also pair really well with a display on your case’s side panel. Finalmouse says the Centerpiece will be available in early 2023.