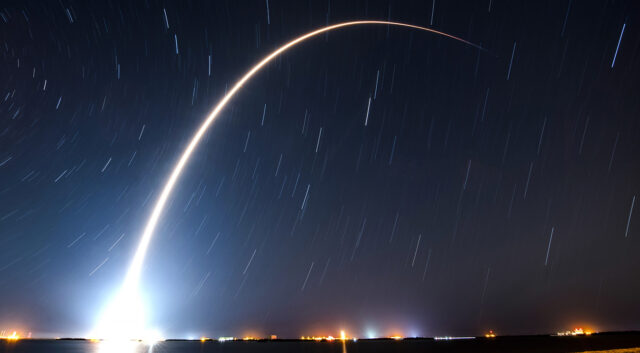 SpaceX recently asked for FCC approval to begin its Starlink Gen2 deployments before the end of 2022, and it followed through. Today, the company launched 54 new Starlink satellites to orbit that will form the first element of the firm’s Gen2 network. However, SpaceX hasn’t discussed what, if anything, is different about these satellites — they were launched aboard a Falcon 9, and the true next-gen Starlink hardware will require Starship, which has yet to reach orbit.

The Falcon 9 rocket blasted off in the early hours of Wednesday on the Starlink 5-1 mission. It was the 60th Falcon 9 launch for 2022 with just one more on the schedule. The mission itself was the kind of textbook perfection we’ve come to expect from the Falcon 9. After sending the second stage on its way, the first-stage booster came down for a landing on the company’s A Shortfall of Gravitas drone ship. The satellites were released in the planned orbit, making them the first to count toward the company’s 7,500 allotment from the FCC.

Although SpaceX did not offer details on the satellites, the hardware is visible in the video stream after the payload faring was jettisoned. The 54 satellites are stacked inside, very much like all the past Starlink launches, but the Gen2 satellites are supposed to be much larger and more capable. So what makes this a “Gen2” mission? The satellites were deployed in a new orbital shell authorized by federal regulators for the enhanced Starlink network. It’s possible these satellites will be used to test features of the true Gen2 hardware, or perhaps they will be used to beef up connectivity until Starship is ready.

SpaceX says the Gen2 expansion will alleviate the congestion issues that have plagued Starlink throughout 2022. At launch in 2020, Starlink provided speeds around 100Mbps, which was several times higher than traditional satellite internet, while also offering latency not that far off from wired broadband. However, the demand for Starlink access has caused speeds to slow, and the company is planning to institute residential data caps in the coming months.

Previously, SpaceX CEO Elon Musk said he hoped to complete the first orbital test of Starship in 2022, but that didn’t happen. The company’s new megarocket hasn’t flown in months, but SpaceX has been conducting static fire tests with the Super Heavy first stage, which is required to boost Starship into orbit. When complete, Starship will be capable of deploying the more powerful Gen2 Starlink satellites, but that’s just the start. SpaceX also plans to use Starship to support NASA’s Artemis lunar landings, perform sub-orbital surface-to-surface transport on Earth, and reach distant destinations like Mars. And Musk still insists he wants to colonize the red planet. Can’t do that without a megarocket.