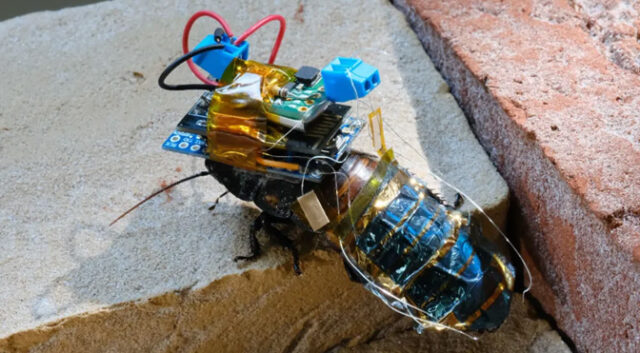 Cockroaches have existed for hundreds of millions of years, and it’s often said they’ll go on living even if humanity nukes itself into oblivion. Before the roaches inherit the Earth, they are at the mercy of scientists who seem obsessed with turning them into cyborgs. The latest robo-roach advance utilizes a flexible solar cell to power a circuit that plugs right into the insect’s nervous system. Press a button, and the roach does as commanded. What could go wrong?

Like many insects, roaches have a pair of sensory appendages called cerci — they’re the small antenna-like projections on the back end. These structures are like a mainline into the roach’s nervous system. Applying a small electrical impulse to one or the other can make the insect turn left or right, depending on which cerci is activated. Previous studies have shown that it’s possible to use electrical stimulation to essentially steer a roach around obstacles.

While you don’t need a lot of power to drive a roach, even small batteries are heavy and bulky. Cockroaches have flexible abdomens, which can help them flip over or roll up if they should get stuck, and mounting electronics to them limits their locomotion and makes them less useful as robotic drones. A team from the Riken research institute in Japan sought to address this shortcoming with an innovative flexible solar cell. You can see the cell plastered on the Madagascar hissing cockroach’s abdomen, where it provides power to the electronics package without inhibiting the insect’s movement.

The team tested numerous ultra-thin materials on which to build the solar cell. Eventually, they settled on an organic thin film with a pattern of adhesive and non-adhesive segments that preserve the hissing cockroach’s natural flexibility. According to the newly published study, the roach-mounted solar panel is capable of generating 17.2 mW of power, which is more than enough to power the backpack’s microcontroller.

Getting a controllable roach with most of its natural mobility intact is just the start. If you want a useful cyborg, you need to add things like cameras and sensors, all of which require power. The solar panel as devised in this case isn’t powerful enough for cameras, but some low-power sensors could work. Scientists believe cyborg insects could eventually explore tight spaces and assist in rescue operations following a disaster, and they’ll only get more capable as electronics continue to get smaller and more flexible.