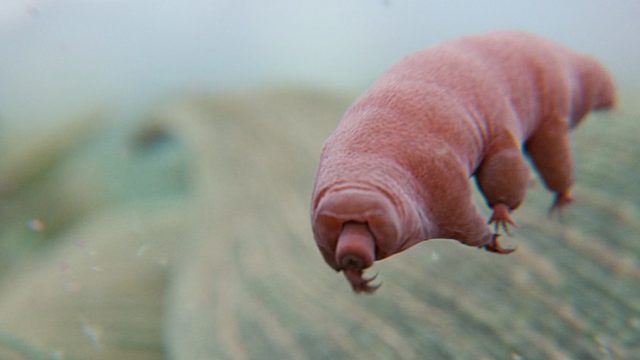 Tardigrades, also known as water bears, are just about indestructible. No matter the threat, it seems tardigrades have a trick up their tiny, tiny sleeves. We’ve previously written about these durable little creatures; in 2017, we discussed reports that tardigrades could survive otherwise-lethal dehydration by turning into a kind of bioglass. Now, a group of Japanese researchers has described a new way for tardigrades to cheat death. Evidently, to save itself from drying out, the lovable water bear can become a gummy bear.

“Although water is essential to all life we know of, some tardigrades can live without it potentially for decades. The trick is in how their cells deal with this stress during the process of dehydration,” said Associate Professor Takekazu Kunieda from the University of Tokyo’s Department of Biological Sciences.

“It’s thought that as water leaves a cell, some kind of protein must help the cell maintain physical strength to avoid collapsing in on itself. After testing several different kinds, we have found that cytoplasmic-abundant heat soluble (CAHS) proteins, unique to tardigrades, are responsible for protecting their cells against dehydration.”

When in water or inside a creature, many proteins loosen up and act like kelp, with waving, frond-like arms. In this well-hydrated state, many different proteins can co-exist within the same volume of tardigrade (or anything else, really), forming a gel. If things get too dry, the proteins can harden, curling up into a tangled, unresponsive mess. However, tardigrade proteins have a minor superpower. When conditions are hot and dry, this gel becomes stiff and springy, to support and protect the tardigrade’s cells from conditions that would otherwise kill them. Once it’s wet enough, the proteins slowly relax, allowing the cells to resume normal function.

Gummy Bears or Glass? Why Not Both?

While the gummy-bear process is very different than glassing, the two explanations aren’t mutually exclusive. Not all species of water-bear experience the same threats. Instead, they each have their own special molecular defenses. But the real trick is coming back from the inert states tardigrades enter to protect themselves. 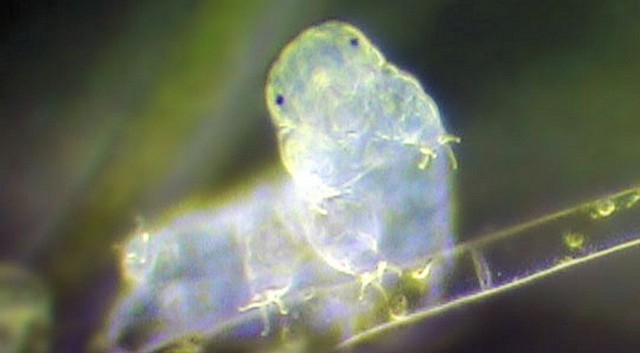 Look at him, he’s already a gummy bear. But he’s happy to see you.

“When the animal completely desiccates, [tardigrade-specific disordered proteins] vitrify, turning the cytoplasmic fluid of cells into glass,” said Thomas Boothby, lead author of the 2017 paper exploring tardigrades’ tolerance of extremes. The process Boothby and coauthors describe is similar to what happens when melting sugar to make hard candy. Inside the tardigrade’s cells, the proteins and sugars form a type of sugar glass. In the process, says Boothby, “We think this glassy mixture is trapping [other] desiccation-sensitive proteins and other biological molecules and locking them in place, physically preventing them from unfolding, breaking apart or aggregating together.”

In contrast, in the new report, the authors write, “CAHS proteins form gel-like filaments as they dry out. These form networks that support the shape of the cell as it loses its water. The process is reversible, so as the tardigrade cells become rehydrated, the filaments recede at a rate that doesn’t cause undue stress on the cell.”

Here you can see the gel-like filaments previously made by CAHS proteins gently breaking down as the cell rehydrates. Image: A Tanaka and T Kunieda.

The authors of this new paper also provide evidence that the gummy-bear gel proteins have “limited functionality” in human cultured cells. We probably won’t be turning people into gummy bears anytime soon. However, Kunieda and his team hope that their report leads to new ways to gently preserve biomaterials. If successful, it could extend the shelf life of medicines, research materials, or even whole organs waiting for transplant.

The report, Stress-dependent cell stiffening by tardigrade tolerance proteins that reversibly form a filamentous network and gel, appears in this month’s issue of PLoS Biology.