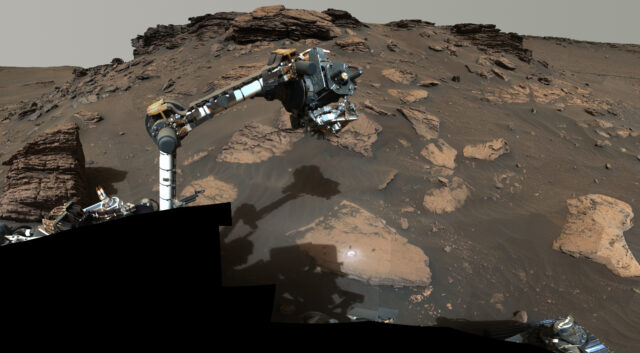 The Perseverance rover has been exploring Jezero Crater since it arrived on Mars in early 2021. It made its way across the floor of the crater until this summer when it arrived at the river delta, which was NASA’s reason for visiting Jezero in the first place. That decision appears to be paying off. NASA reports that Perseverance has collected several samples with the most abundant organic detections of the mission to date. Organic molecules can be an indicator of life, but we’ll have to wait until the samples are back on Earth to know for sure.

Today, Mars has no permanent surface water, but that was not the case 3.5 billion or so years in the past. Jezero was a lake in those days, and the river delta still visible on its floor could be an ideal place to search for evidence of ancient life. Perseverance examined the floor of the crater on its way to the delta, finding igneous rocks and some evidence of organic compounds. Curiosity also detected organics on Mars. That in and of itself is not evidence of life, but the team is excited about what they could find in the delta region.

On July 20, the rover abraded the surface of a meter-wide rock called “Wildcat Ridge.” The rover then scanned the fresh material with an instrument called SHERLOC (Scanning Habitable Environments with Raman & Luminescence for Organics & Chemicals). It revealed the presence of organic molecules that can yield significant information about the aqueous environments where they originally formed.

According to NASA, finding a high concentration of organic material in the delta is a good sign. It formed in a time and place where we believe life could have existed, and these molecules can be a “potential biosignature.” Of course, there are also chemical processes that can produce the same types of molecules. We won’t know which this is until someone can examine the samples in detail back on Earth.

Why are we so excited about new Mars rock samples collected by @NASAPersevere? Some have the highest concentration of organics this rover has ever seen.

This doesn’t necessarily mean life—we’ve got to bring them back to find out. Here are the next steps: https://t.co/uWyaZbvQzm pic.twitter.com/SLsYbxrcwY

So far, Perseverance has collected 12 samples from Mars with its sample caching system, including four from sedimentary rocks like Wildcat Ridge in the delta region. These ultra-clean sample tubes will stay in the rover’s belly until the planned sample return mission gets off the ground. Recently, the NASA-ESA project moved one step closer to reality with the addition of two Ingenuity-like helicopters and the removal of a secondary rover. Currently, NASA expects the Sample Retrieval Lander to launch in 2028. Once the samples are aboard, the Mars Ascent Vehicle will take them into orbit where the ESA’s Earth Return Orbiter will pick them up and head back home.

These exciting new organics, along with other samples from the mission, could arrive on Earth as soon as 2033. On Earth, scientists will have access to all the instruments and technologies they need to fully explore these samples. And just maybe they’ll find evidence of long-extinct life on the red planet.