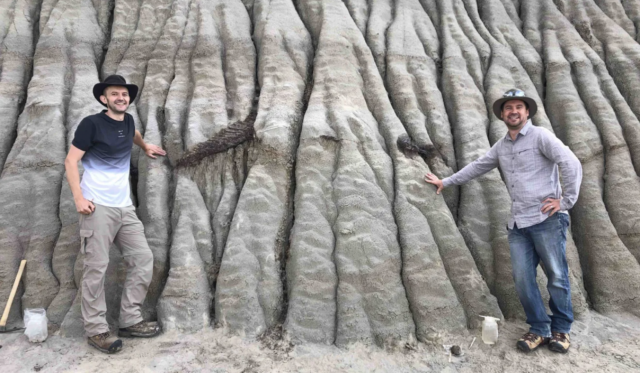 Professor Brian Pickles and paleontologist Caleb Brown stand next to the exposed parts of their newly-discovered fossil. (Photo: Melissa Dergousoff/University of Reading)When we think of dinosaur fossils, we often think of footprints preserved in sandstone, or bones carefully displayed inside a museum. But what about mummified dinosaurs? That’s what researchers think they’ve found lodged into a hillside in Alberta, Canada.

Professor Brian Pickles, a paleontologist at the United Kingdom’s University of Reading, recently led a scouting trip at Alberta’s Dinosaur Provincial Park. The park is a United Nations Educational, Scientific and Cultural Organization (UNESCO) World Heritage Site known for its abundance of strikingly diverse dinosaur fossils. Pickles—who was accompanied by a group of scientists from Canada’s Royal Tyrrell Museum and Australia’s University of New England—was at Dinosaur Provincial Park to locate a good spot for an international school field trip when he and his team saw what appeared to be a full “dinosaur mummy” sticking out of the hillside.

An excavation mission followed. The mummy’s exposed parts included a foot and part of a tail covered in fossilized skin. The dinosaur is so well-preserved that the researchers were able to make out individual scales and tendons. If the rest of the fossil is as well-preserved as the exposed bits, the researchers might even be able to examine the dinosaur’s internal organs, as well as its stomach contents to determine what its last meal was. 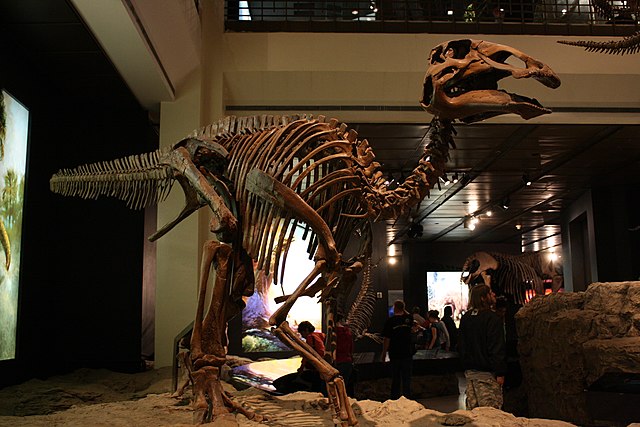 A duck-billed hadrosaur on display at the Houston Museum of Natural Science. (Photo: “The Cookies,” AndyTang20/Wikimedia Commons)

The mummy’s removal is still underway, so it’ll be a while before scientists can confirm its species. Right now the dinosaur is believed to be a juvenile duck-billed hadrosaur, a type of herbivore that lived during the Late Cretaceous Period (approximately 145 to 66 million years ago). Pickles’ team believes this one in particular lived 77 million to 75 million years ago, about 10 million years before dinosaurs went extinct.

“This animal probably either died and then immediately got covered over by sand and silt in the river,” Pickles told USA Today. “Or it was killed because a river bank fell onto it.” Pickles went on to say that because dinosaurs grew very quickly, it’s less common to find fossilized juveniles. This specific subset is important as it offers researchers insight into how dinosaurs’ lives developed with age.

The team is expected to have the block of hillside containing the fossil excavated by the end of summer 2023. The block will then be transported to a lab, where scientists will carefully surface the dinosaur and analyze its skull to confirm its species. Once testing is complete, the fossil will be displayed at the Royal Tyrrell Museum of Paleontology.