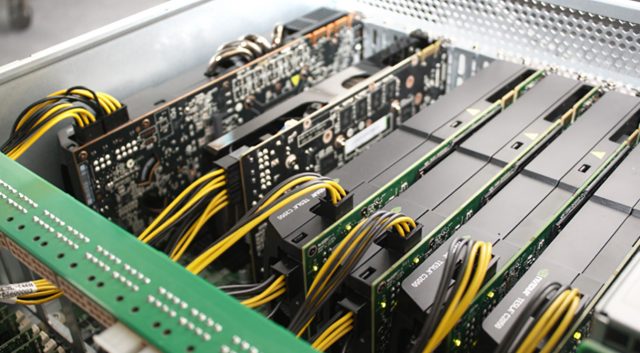 For the last several years, it’s been almost impossible to get a decent GPU without spending three or four times the MSRP, but thankfully, things are changing. You can even get video cards at a discount now if you don’t mind rolling the dice with a used one, but maybe you want to think twice about that. A new video making the rounds purports to show Vietnamese crypto miners preparing used GPUs for resale by blasting them with a pressure washer.

It’s a foregone conclusion at this point that former mining GPUs have poor reliability. They’ve often been running flat-out for months, or years, in poorly ventilated racks with little or no cleaning. You’re more likely to encounter a major failure early with these cards than with a GPU that was used in a regular PC for a similar amount of time, and that’s before you account for any ridiculous cleaning shortcuts.

In a video posted on Twitter, a disembodied hand can be seen wielding a power washer. The nozzle is blasting a rack of Zotac Nvidia GPUs, and before you think this is just a one-off joke, there are more cleaning videos. There’s a second pressure washer video, plus one featuring full submersion of used GPUs.

It’s understandable to want a shortcut when you need to clean dozens or hundreds of GPUs, but this is clearly a terrible idea. While it’s possible to clean a GPU with distilled water (or even tap water if you really, really want to), it’s not worth the risk. Long-term damage to the circuits and corrosion are basically unavoidable, particularly if you’re just spraying the cards and moving on without making sure they are totally dry. Not to mention, a pressure washer could physically damage some of the components on these cards.

(2/3) Therefore, I recommend you to be extremely careful when buying 2nd cards. Even if they come from EBay, Xianyu or even where you live. pic.twitter.com/qdr3fNR1f4

We expect to see a lot of these former mining cards on the market soon, so be wary. Ethereum finally finished The Merge earlier this month, moving the world’s second-largest cryptocurrency from proof-of-work to proof-of-stake. That means you can’t mine the digital money with GPUs anymore. Instead, new coins are “minted” based on the amount of ETH a node holds and how long it has held it.

In the days after The Merge, we were watching for another mineable cryptocurrency like Dogecoin to tick upward as miners changed their focus, but that hasn’t happened. It appears miners are largely in a holding pattern as they wait to see if another mineable coin will become the de facto standard. While Bitcoin is mineable, most of these operations use ASIC hardware, which is designed only for mining and is therefore more efficient. Therefore, miners are preparing to unload a bunch of old GPUs. If you’re looking to pick up a used GPU, just keep this video in mind, and go in with your eyes wide open.