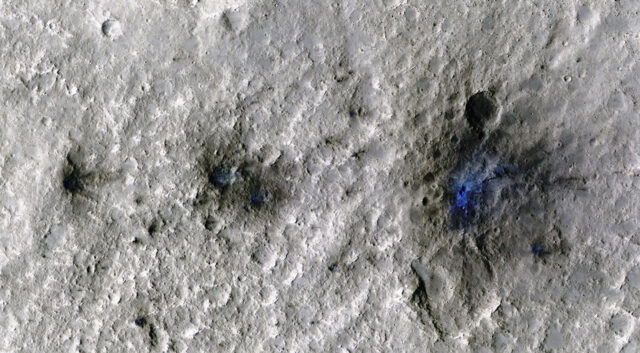 NASA’s InSight mission on Mars is wrapping up, but it’s had quite a ride on the red planet. It recorded marsquakes, sent back Martian weather reports, and it even heard the sound of meteorite impacts. Scientists from the Jet Propulsion Laboratory (JPL) confirm that InSight picked up audio from four separate impacts between 2020 and 2021. Yet another first for the mission.

The first detected impact occurred on Sept. 5, 2021 — you can hear the audio of that one in the video below. According to NASA, InSight recorded the sound of the meteorite hitting the atmosphere, breaking into three large pieces, and finally impacting the ground a few dozen kilometers away from InSight in a region of Mars called Elysium Planitia.

The meteorite sounds probably aren’t what you’d expect given that description, but Mars is very different from Earth. The planet’s atmosphere is just one percent as dense as ours, so InSight doesn’t have a traditional microphone to listen to the world. It has an atmospheric pressure sensor that essentially functions as a low-frequency microphone. With post-processing, the pressure waves can be shifted into a range we can hear. That’s also how NASA was able to reveal the howling winds of Mars.

NASA describes the sounds of the impact as a “bloop,” which is thanks to a peculiar atmospheric effect when low-frequency sounds arrive before higher ones. After detecting the September 5th impact, NASA tasked the Mars Reconnaissance Orbiter with scoping out the land around InSight in search of new craters, and it spotted a trio of them from the recorded impact (see above). Going back through the data, the team identified three more impact events: May 27, 2020; Feb. 18, 2021; and Aug. 31, 2021.

InSight’s main claim to fame was being the first mission to deploy a seismometer on another planet, giving scientists an unprecedented window into the planet’s internal structure. The team also spotted seismic effects from the impact events, although none of them surpassed 2.0 magnitude. The study notes that it should be possible to identify future impact events just from the seismic signature.

InSight probably won’t be the mission to do that work, though. The lander’s solar panels are being increasingly covered with dust, which makes it hard to keep its batteries charged. NASA is currently shutting off select systems to save power, but the team expects InSight will go offline forever later this year.