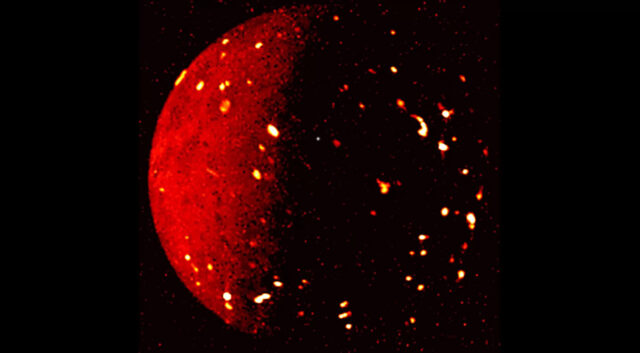 NASA’s Juno probe reached Jupiter in 2016, spending several years studying our solar system’s largest planet. The spacecraft is now in the second year of its extended mission as it focuses on the planet’s expansive system of moons. NASA has just released a new image of the volcanic moon Io, and you can consider this a teaser — the agency acquired a new image of the moon this week from an even closer vantage, and it’ll release that one soon.

Jupiter’s moon Io is the most volcanic place in the solar system, according to NASA. The image above was captured by the spacecraft’s Jovian Infrared Auroral Mapper (JIRAM) infrared camera from a distance of 50,000 miles (80,000 kilometers). The bright spots are active volcanic eruptions on the surface, and we’ll get a much closer look at these features when NASA releases the latest pic. The flyby on Dec. 15 was just the first of nine passes, and the closest of them will put Juno just 930 miles (1,500 kilometers) above the surface.

Io is just over a quarter the size of Earth but with a much lower density — its physical parameters are actually very close to Earth’s moon. However, whereas our moon has long since cooled, the incredible gravity of Jupiter causes continuous tidal heating as the moon zips around the gas giant in a tight orbit. Io will be the focus of Juno for the next year and a half as it gathers data on the moon’s volcanic activity, as well as how it interacts with Jupiter’s powerful magnetosphere and aurora. 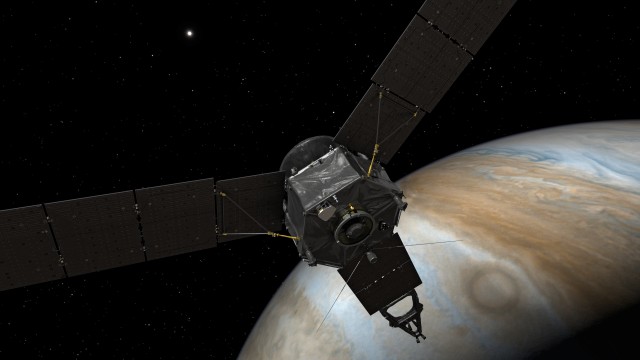 This illustration depicts NASA’s Juno spacecraft at Jupiter, with its solar arrays and main antenna pointed toward the distant sun and Earth. Image: NASA/JPL-Caltech

Before setting course for Io, the spacecraft took a closer look at Ganymede and Europa, and it’s been going better than anticipated. “Juno sensors are designed to study Jupiter, but we’ve been thrilled at how well they can perform double duty by observing Jupiter’s moons,” says Juno Principal Investigator Scott Bolton of the Southwest Research Institute.

Juno has provided the first close-up images of Ganymede in 20 years, and its Microwave Radiometer (MWR) provided new data about the interior of the ice-covered Europa. That data could help inform the Europa Clipper mission, which is scheduled to launch on a SpaceX Falcon Heavy in 2024. The Clipper was originally supposed to launch on the Space Launch System, but delays in getting the Artemis moon missions off the ground caused NASA to switch to SpaceX.

NASA hasn’t said when we’ll get the new, close-up Io images, but the one we just got was captured in July 2022. So, it may be a few months.