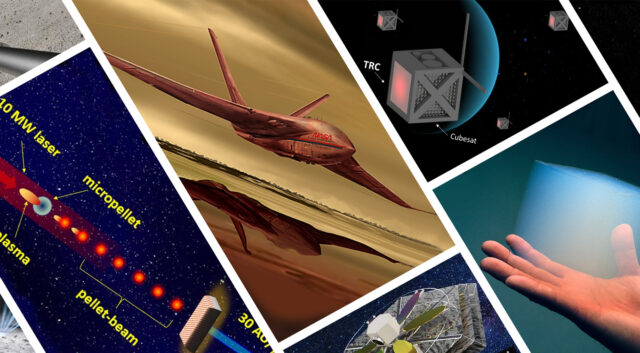 Not long ago, an enormous telescope hovering beyond the moon and peering back to the dawn of the universe would have been science fiction, but the James Webb Space Telescope is out there today doing very real science. The next big advancement in space science has to start somewhere, and the goal of the NASA Innovative Advanced Concepts (NIAC) program is to foster those ideas so they can become tomorrow’s missions. NASA just announced the latest round of NIAC awards, including, but not limited to, a seaplane for exploring a Saturnian moon and a giant space laser for faster interplanetary travel.

The 14 newly designated Phase 1 projects envision technologies that don’t currently exist but are reasonably plausible — no far-future concepts like warp drives or artificial gravity. For example, there are several notions for next-gen propulsion, like the Pellet-Beam Propulsion system proposed by the University of California. This concept would use a stream of microscopic hypervelocity particles propelled by laser ablation to push a spacecraft to incredible speeds. The proposal says such a system could reach the edge of the solar system in just three or four years.

The Pellet-Beam system doesn’t have a mechanism to slow down or maneuver once a spacecraft reaches its intended destination. Another team from Seattle’s Positron Dynamics has proposed an engine that could do that, a new type of fission fragment rocket engine (FFRE) that embeds the nuclear fuel in an ultra-low density aerogel matrix. This engine would use the fission products of a nuclear reaction as the propellant, pushing it to the same speeds as Pellet-Beam propulsion.

And what about power all the way out there at the edge of known space? The Rochester Institute of Technology was chosen for a NIAC grant to develop its thermoradiative cell (TRC), which is similar to the radioisotope thermal generator used for missions like Perseverance. This tiny generator (RTG) would have a volume of just 0.2 liters versus 212 liters for standard RTGs, but that would be enough for a 10-fold increase in power for a cubesat deployed in orbit of an outer planet.

Speaking of the outer planets, there is increasing interest in studying the multitude of moons orbiting gas giants, and Titan is a prime target. Proposed by Washington-based Planet Enterprises, TitanAir would be a seaplane with the ability to fly through the moon’s nitrogen atmosphere or sail across its seas of liquid hydrocarbons. The plane would be able to collect atmospheric samples as it flies using vents on the wing’s leading edge.

The TitanAir, along with the 13 other chosen projects, will get a Phase 1 grant of $175,000 to develop the concept further. Maybe one day we’ll send a laser-propelled ship to Titan carrying a seaplane, but it’s all science fiction for now. You can check out a summary of all the proposals on NASA’s website.