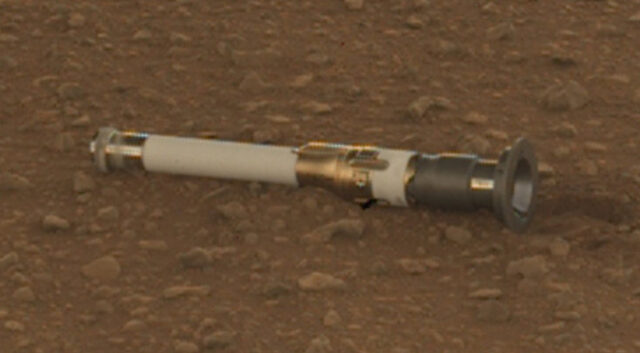 NASA is moving forward with plans to bring samples from Mars to Earth for more intense study than is possible on the red planet, and its robotic explorers are already laying the groundwork. The Perseverance rover has deposited a cache of sample tubes on the surface as a backup for the eventual return mission, but images of the lightsaber-like tubes lying on the dusty landscape led some to wonder if they were going to be covered in dust by the time the lander shows up. NASA has clarified its plans to say that, no, the tubes will still be easily spotted when the time comes.

Perseverance began setting out the tubes earlier this month. They’re just sitting on the surface, surrounded by uneven soil and small rocks, but there is a general misconception about how much dust gets around on Mars. While it’s true that the planet’s dust storms have doomed more than one surface mission, that’s because it doesn’t take much dust to coat a solar panel. The amount of dust accumulating on Mars is actually quite small.

NASA explains that the planet’s atmosphere, which is just 1% as dense as Earth’s, can produce extreme gusts of wind. However, it doesn’t carry very much material. As evidence, the team points to Curiosity, which has spent years on Mars and came through the 2019 global dust storms only moderately dustier. Even the stationary InSight lander is far from buried, although its solar panels are now blocked by a thin layer of Martian fines.

How much dust does a Mars spacecraft gather after nine years on the surface? Take a look at @MarsCuriosity’s top deck after nine years: dusty, but hardly unrecognizable. pic.twitter.com/eVQcTgzQ84

Perseverance is bristling with cameras, spectrophotometers, and other scientific brick-a-brack, but it can’t do all the science NASA might like. Before sending the robot to Mars, engineers at JPL had to determine which instruments could feasibly be miniaturized and hardened to travel to another planet. Naturally, there are a lot of experiments that you can’t do remotely, and it’s the same for every space mission. That’s why NASA devised the rover’s sample caching system.

As Perseverance explores the planet, it collects rock cores and soil samples in its specially designed, ultra-clean tubes. It has already saved 21 samples from around Jezero Crater, and if all goes as planned, it will meet up with the lander in about nine years to drop them off. However, planetary exploration is all about redundancy. In case Perseverance doesn’t last that long on Mars, it’s setting up the sample depot with duplicate tubes that can be collected by the lander’s helicopter scouts. NASA expects the tubes will be easy to spot, plus the team is keeping a precise record of their locations. Returning these surface samples to Earth is a major undertaking, and NASA isn’t cutting any corners.