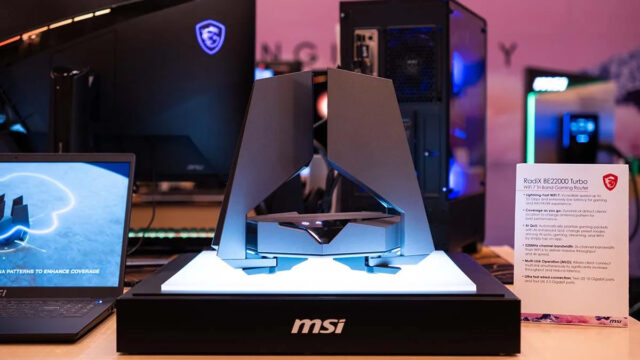 Over the past few years, many people have given up on using a single router in favor of a mesh network. A mesh configuration can allow for more complete coverage in large homes, with several access points a user can get a signal from as they move around. This usually improves signal strength in the far reaches of a home or other areas where a solo router may struggle with walls and distance. Now MSI has come up with a solution to this problem that uses a single access point. It’s a router with antennas that dynamically rotate, allowing them to track a device in real time. If you went around a corner, for example, its antennas could turn on their own to keep the signal aimed directly at you.

MSI calls it the RadiX BE22000 Turbo, and it’s not slated to emerge until 2024, according to Engadget. That’s partly because it’s a Wi-Fi 7 device, and it’ll be a while before we have Wi-Fi 7 devices in our hands. Right now the vast majority of routers on the market are still Wi-Fi 6 or Wi-Fi 6e.

The RadiX BE22000 Turbo sports four really tall antennas that give it a Star Wars vibe; even more so than previous routers with a ton of antennas on them. Each antenna has its own motor, allowing them to rotate horizontally to change the direction of the signal. This is similar to a router shown at CES 2022 by TP-Link, the Archer AXE200 Omni. That model also used four rotating antennas, but they could move both horizontally and vertically. It doesn’t appear that router ever made it out of the lab though, as it’s not listed on TP-Link’s website.

Watching the video of it in action, it’s pretty clear it’s a concept that’s far from finalized. The movement of the antennas looks kind of janky. Many companies show off bleeding-edge gear at CES just to grab headlines. It would require some benchmarks to see if the rotating antennas actually improved connection speed over static ones. MSI claims the antennas can “dynamically detect clients’ location,” but this makes us wonder how it would prioritize certain clients over others. In any household, you can easily have more than 10 devices connected at any given time, but perhaps the router’s software lets you prioritize devices manually. Or maybe it can understand when a device is moving and just keep its signal locked on that one. But what if you go up or down stairs? We have so many questions.

Aside from the novel antennas, MSI claims it offers four times the bandwidth of Wi-Fi 6 routers. That’s due to Wi-Fi 7’s 320MHz channels on the 6GHz band, which are twice as wide as the 5GHz band’s 160MHz channels. It offers up to 22Gb/s of bandwidth, which is also more than twice what was available previously. Finally, Wi-Fi 7 offers Multi-Link Operation (MLO), allowing a single client to use multiple radios at the same time to improve performance. The router sports dual 10Gb ports and four 2.5Gb connections, indicating it’ll be quite expensive if it ever goes on sale.

Qualcomm Will Enable Satellite SOS on Flagship Android Phones in 2023