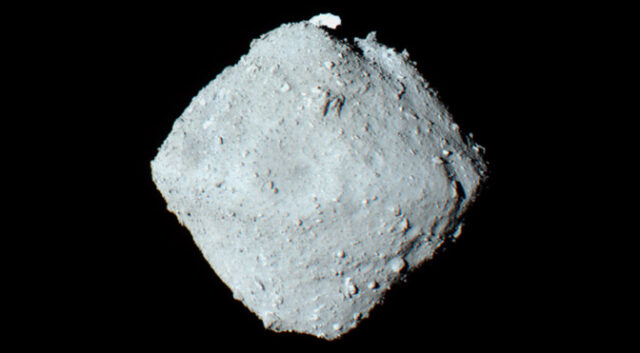 Everyone is currently focused on the revenge NASA has exacted for dinosaurs by crashing the DART spacecraft into an asteroid, but that wasn’t our first salvo against the space rock menace. It’s been just over three years since Japan’s Hayabusa2 probe shot the asteroid Ryugu with multiple metal slugs to collect its samples. It wasn’t just about justice for dinos, though. The Hayabusa2 materials have been on Earth since late 2020, and new research reveals how Ryugu has changed over its lifetime, including a cataclysmic impact that made it the small-ish rock it is today.

The Japan Aerospace Exploration Agency (JAXA) split its precious 5.4 grams of Ryugu among six different teams around the world. One of the most interesting discoveries is how and where Ryugu formed. Based on remnant magnetization in the samples, scientists have determined that Ryugu formed in the primordial solar nebula, which existed before the formation of the planets and has since condensed to the planets, moons, asteroids, and comets we see today. That means, by some measures, parts of Ryugu are older than the solar system.

Ryugu formed when the nebular gas was still very dense, blocking sunlight and driving temperatures down to -200 degrees Celsius (-328 degrees Fahrenheit). This parent body picked up large volumes of water and carbon dioxide ice and likely measured about 62 miles (100 kilometers) in diameter. The water and carbon dioxide reacted in the parent body to form hydrous silicates and carbonate minerals, which make up the majority of the samples obtained by Hayabusa2. There was even some liquid water still trapped inside crystals in the samples. 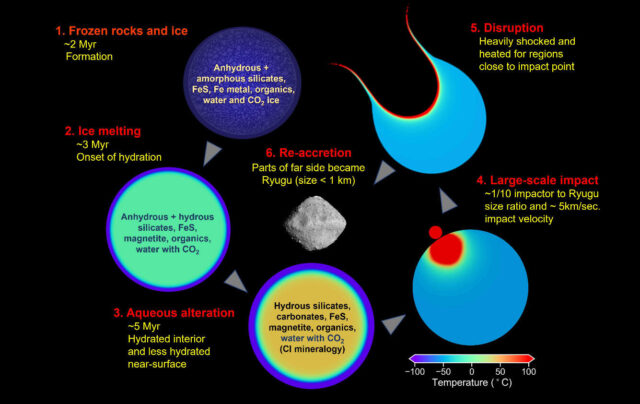 The research suggests that the original Ryugu collided with a smaller object, roughly one-tenth of its size, a billion years ago. This event blasted the parent body to pieces, and part of it reformed as the sub-kilometer asteroid we know today. Scientists report that today’s Ryugu is a mixture of the internal and external materials of the parent body. It is believed that water-bearing asteroids like Ryugu, which formed and were then pulverized outside the orbit of Jupiter, could have played a part in early formation of planets in the solar system.

We’ve clearly learned a great deal already from a few grams of Ryugu, and there’s much more to come. NASA’s OSIRIS-REx mission picked up as much as several kilograms of material from Bennu, and it’s on course for Earth right now. It’s expected to land about a year from now, in September 2023.