Dell’s ‘Concept Luna’ Modular Laptop Is Still Alive, Can Be Repaired by a Robot 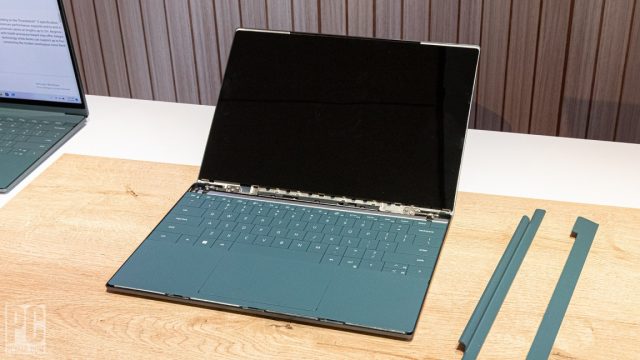 It was a year ago when we first got a glimpse of Dell’s Project Luna. It was designed as a modular laptop with easy-to-swap parts that could be upgraded, upcycled, or recycled, both to make repairs easier and to reduce e-waste. It was envisioned as an environmentally friendly laptop, distinctly easier to repair over its life cycle compared with today’s intricate notebooks. We said at the time it was a great concept, but we just didn’t have faith that Dell would stick with it in the long haul.

It turns out we might have spoken too soon, as the company is still plugging away at it. At a recent press event in NYC, our sister site PCMag got another look at it, and it’s now so easy to replace parts that even a robot can do it.

At the media event, Dell went over the basics of Luna and demonstrated how easy it was to repair. The concept is that it saves money, time, and e-waste by being able to just easily swap out a single part when it goes bad instead of having to buy a new laptop. The problem is swapping out a single part might mean sending the unit back to Dell, which is time-consuming and costly. Luna is different, as it’s designed to be repaired by a user without any technical knowledge.

A simple tool pops open the keyboard tray. From there, it’s like using Lego bricks. Each part can be easily removed as there are practically no cables attaching them. Instead, it uses contact connectors, so the keyboard, speakers, battery, and even the motherboard can be lifted out of the chassis with ease. It takes about a minute to completely disassemble it. As someone who has repaired laptops professionally, I can say Dells were always easy to take apart, but this is a whole new level. This looks easy enough that anyone could do it.

As Dell would probably say, “That’s the point.” Dell has made it sufficiently easy to swap out modules that even a robot can do it. Normally, human fingers are required for disconnecting delicate cables and connectors. Not so on the Luna. Dell showed its robot plucking parts out of the Luna chassis with suction cups. The parts inside record telemetry data, so they can report how long they’ve been in service. They can also identify which machines they were installed in so that there’s a clear record. Additionally, each part has a QR code to make it easy to identify.

We like what Dell has done with making the parts swappable. We can see an IT department having a room full of replacement keyboards, batteries, and so forth to easily swap them out when one goes bad. This could make life easier for a lot of companies, and end users too. However, our initial gripe with Luna was that it sounded great in concept, but Dell would need to support the devices for a very long period. If a laptop gets deployed and needs a new battery four years later, it would need Dell to be making those parts. So this will require a long-term commitment from Dell to be successful. Previously, it backed out of similar commitments with Alienware “upgradeable” laptops, so that’s the source of our skepticism. However, these parts are obviously much less expensive than a Turing GPU or Intel CPU, so it does seem more feasible.

For now, we don’t know much more about Luna, such as its specs and what it might cost. We do know that Luna is only this one laptop for now, and it’s not an entire product line. Dell is hoping to expand the concept from Luna to its other lines of notebooks. We can especially see it as a boon to its corporate-based Latitude models one day.