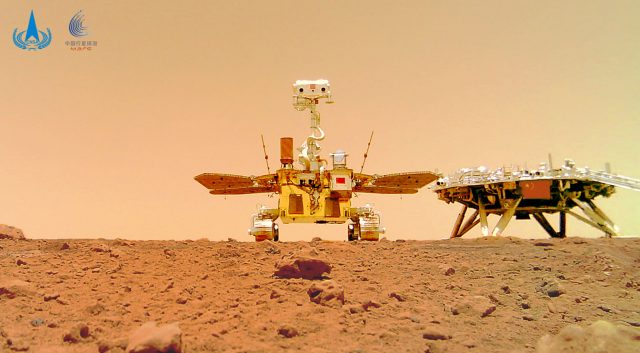 Mars doesn’t have any native inhabitants (that we know of), but it is inhabited by a cadre of robots. Most of the red planet’s mechanical explorers come from the US and Europe, but China succeeded in landing the Zhurong rover last year. The robot has been in hibernation throughout the long Martian winter and was set to awaken late last month. However, that didn’t happen, and the China National Space Administration (CNSA) is beginning to think it never will.

The Zhurong rover landed on Mars in May 2021, and it operated normally until mid-2022 during the onset of Martian winter. Temperatures can drop as low as -220 degrees Fahrenheit (-140 degrees Celsius), and lower sun exposure makes it difficult for solar-powered missions like Zhurong to get enough power to maintain operations. Thus, the CNSA opted to put the rover in hibernation. It was supposed to wake up automatically and ping Earth when its power level hit 140 watts, and key internal components reached a temperature of at least 5 degrees Fahrenheit (15 degrees Celsius).

The team expected to hear from Zhurong by the spring equinox on Dec. 26, but that date came and went without a peep. The current suspicion is that duststorms on Mars have coated the rover’s solar panels, preventing it from gathering enough power to wake up. This has spelled doom for plenty of robotic missions on Mars in the past, most recently NASA’s InSight lander. The near certainty that any solar panel on Mars will eventually become caked in dust has led NASA to use Radioisotope Thermoelectric Generators (RTGs) on long-term missions like Curiosity and Perseverance. 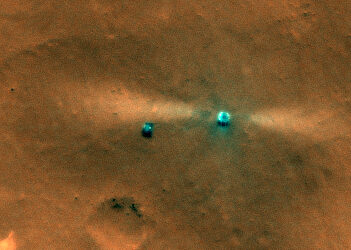 Rover and lander captured by HiRISE from NASA’s MRO in June 2021. Credit: NASA/JPL

With no way to remotely activate the hibernating robot, the CNSA’s next step is to check on Zhurong with the aid of its orbiting Tianwen-1 probe. While the probe cannot contact the rover to get data from its two cameras, the team hopes images from orbit can help shed light on what caused it to remain in hibernation.

Luckily, Zhurong had an entire Earth year (347 Martian sols) to complete its primary science mission. While operational, it gathered data on the geology and atmosphere of Mars and traveled 6,302 ft (1,921 m). If it can be revived, it will be an unexpected bonus. If not, Zhurong has already done everything the CNSA hoped it would.