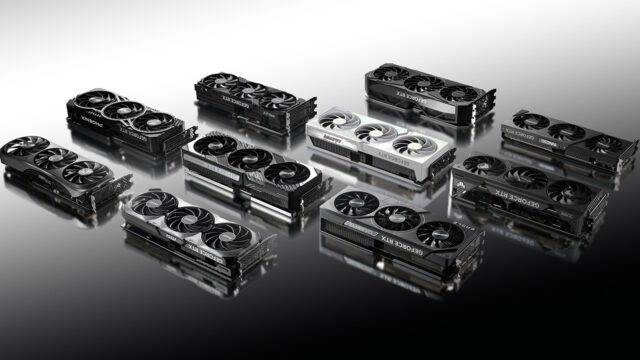 Today at CES, Nvidia finally unveiled the previously unlaunched RTX 4070 Ti. It is easily the most unsurprising announcement of a next-gen GPU in modern memory, simply because Nvidia already did so in September. Now that it’s been rebranded, the GPU will hold down the fort in the upper midrange for Nvidia. It’ll be taking on the slightly more expensive AMD Radeon 7900 series GPUs. It also announced the mobile version of its latest architecture, the RTX 40-series for mobile. In addition, it announced it’s adding the RTX 4080 to its GeForce Now cloud gaming service.

Though the RTX 4070 Ti was expected, and we knew the specs already, now it’s official: It’s a RTX 4080 Ti rebranded, and with a price drop. The RTX 4070 Ti features the AD104 die, along with 7,680 CUDA cores and 12GB of 21Gb/s GDDR6X memory. Its boost clock is 2.6GHz, with a TDP of 285W. However, some add-in board (AIB) partners will likely be offering even higher TDPs and clocks. It’ll be AIB only, with no Founders Edition cards on offer. 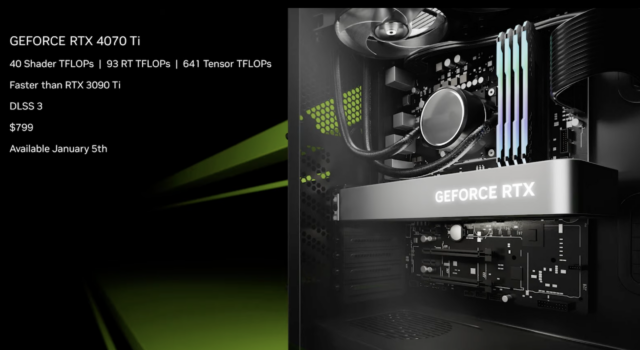 It’ll support DLSS 3 like its predecessors, and is designed for 1440p gaming at high refresh rates. Nvidia says it’s more powerful than the RTX 3090 Ti while using almost half the power. The actual claim is 1.8x faster, but it’s unclear if that’s in rasterization or in ray tracing; it’s likely the latter. Nvidia’s previous benchmarks show the two cards being very close when RTX isn’t involved. These will probably be 2.5-slot GPUs. Though the price starts at $799, that’ll be for the non-overclocked models with basic coolers. We expect a lot of these GPUs to sell for $900 and up, given the current market conditions. Sales begin on Jan. 5, with reviews going up tomorrow, the 4th. 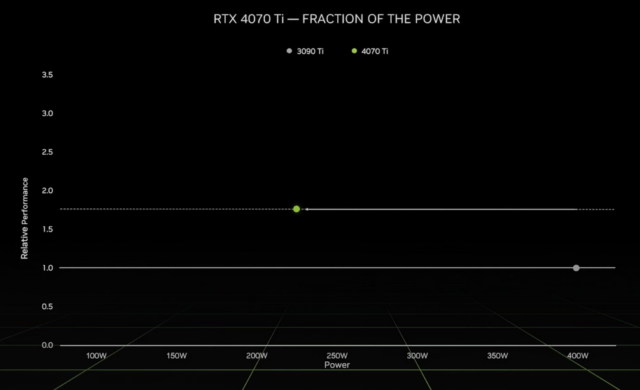 Nvidia claims the RTX 4070 Ti will be faster than an RTX 3090 Ti while using almost half the power.

The company also announced its full lineup of 40-series mobile GPUs. It was rumored Nvidia would only unveil a handful of chips, but it dropped the entire stack. The RTX 4080 and 4090 mobile will power desktop replacement laptops that start at $1,999. These will begin to go on sale on Feb. 8. For those with more modest needs, there are also chips for 14-inch and ultra-thin laptops as well: the RTX 4050, 4060, and 4070. Nvidia claims they offer RTX 3080 performance at one-third of the power consumption. Those will start at $999 and go on sale on Feb. 22. All 40-series mobile parts support DLSS 3. 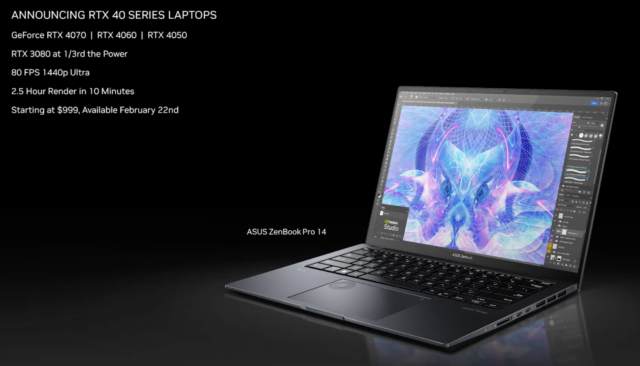 Finally, the company announced it’s bringing its Ada Lovelace GPUs to its cloud gaming service, GeForce Now. Previously the RTX 3080 was the highest tier, but that’ll be replaced by RTX 4080 GPUs for the same price: $19.99 a month. Nvidia will be offering a 240Hz refresh rate mode with Nvidia Reflex. The company claims this reduces latency in Fortnite to 34ms, compared with 56ms with an RTX 3080 at 120Hz, a boon for competitive gaming. This service allows for ray tracing and DLSS 3 in the cloud. More information about this new tier will be forthcoming soon.

TSMC Believes It Will Earn $1.5 Trillion on Its 3nm Process