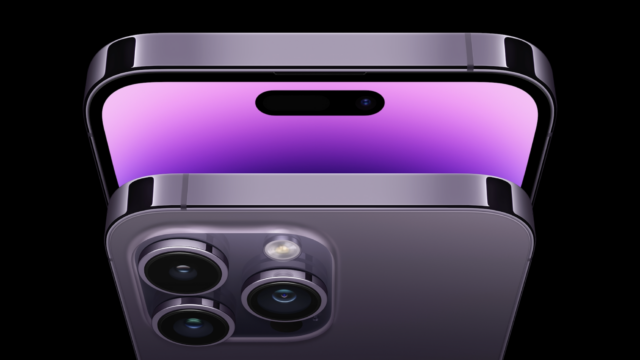 Apple held its Far Out event today, and the company launched several new bits of hardware. It announced upgraded iPhones as expected, and also announced a brand new Apple Watch Ultra designed for extreme sports enthusiasts. It also introduced several new features designed to improve your personal safety in the case of an emergency.

Apple has made some big changes to its phone lineup this year, and it will undoubtedly annoy some people. For the first time, it’s segmented its Pro line from the non-Pro with different hardware. Previously, Apple put the same SoC in both phones but differentiated the Pro with more camera options, a ProMotion display, and other features. This year, that changes. The regular 14 gets the same A15 Bionic SoC from the iPhone 13, while the Pro model gets a new A16 chip built on TSMC’s 4nm node. 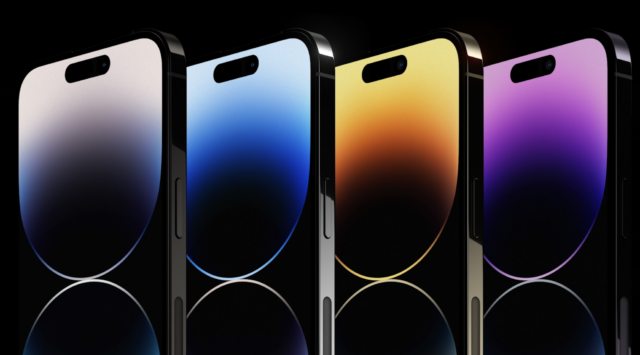 The iPhone Pro has a new pill-shaped “notch.” However, instead of it being a static shape, Apple has totally redesigned how it behaves. In addition to housing the front-facing sensors and cameras, it’s also a notification center called Dynamic Island. The pill will expand in any direction to notify you of events such as pairing a device, an incoming call, or when music is playing. Tapping the “island” will open the app’s controls. It can track two different activities at once, so you can text while also watching a timer counting down and seeing what music is playing (see below). When you swipe up to close an app, it slides into the island, too. Apple says it’s a whole new way of interacting with the iPhone, and we believe it. It is definitely slick, and not something that was leaked previously. 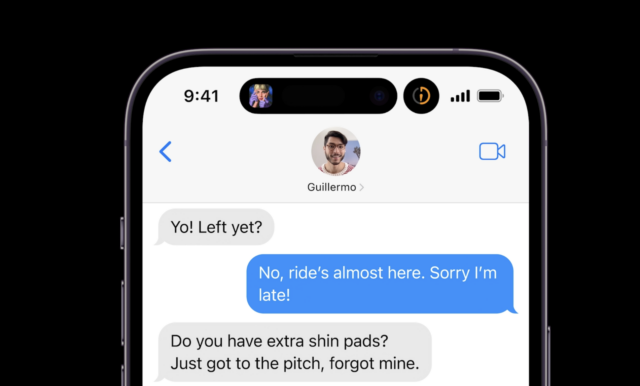 The Dynamic Island can display two apps running in the background while using the phone for other purposes.

Other big changes include a hugely upgraded 48MP rear main camera. That’s 4x the resolution of the regular iPhone 14, so it’s quite an upgrade. The Pro model will also feature an always-on display, which is paired with the 120Hz ProMotion display. Apple says it can still go all day on a charge, thanks to the A16’s increased efficiency. It says it has the capability of dropping the refresh rate down to 1Hz, which allows for it to have a long-lasting battery despite always being visible. The Pro and Pro Max will be available at the same price as their predecessors — $999 and $1,099 — starting Sept. 16, with pre-orders beginning this Friday, Sep.t 9.

Anyone hoping Apple was going to launch an iPhone 14 Mini will be sorely disappointed to see Cupertino is going in the opposite direction. People seem to want bigger phones. So, instead of only offering an expensive Pro Max version for those who want a huge phone, it now has a 14 Plus. It’s the same size as the Pro Max, but features the same hardware as the regular 14, just with a 6.7-inch display. Standout features on the iPhone 14 and 14 Plus include the new safety system (see bottom), the A15 Bionic silicon, auto-focus on the front camera, and an “action mode” for stabilized video. The regular iPhone 14 starts at $799, with the Plus costing $100 more at $899. Pre-orders begin Sept.9, with the iPhone 14 also arriving on the 16th, but the Plus won’t arrive until Oct. 7. 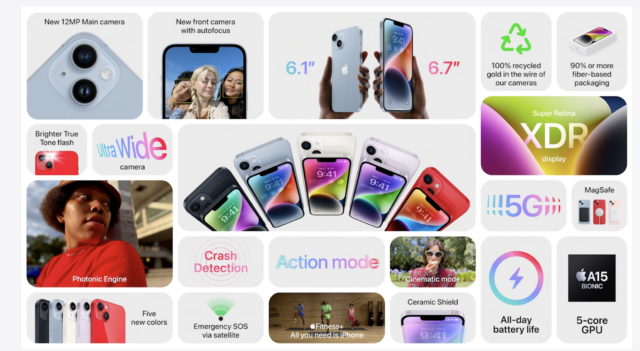 Though it was rumored the new Apple watch would simply be a Pro version, it turns out Apple went hardcore and made it the Ultra. It’s designed throughout for extreme conditions, and for those who enjoy dangerous adventures. It features an all-new design with a larger 49mm watch face surrounded by a titanium body. The display is mounted inside the chassis to prevent cracks if it hits the ground, and the buttons are all submerged within the casing as well. On the right side, the crown and side button are protected by a protruding enclosure to keep the elements out, and there’s a new “action” button on the left side that’s customizable. All three controls are designed to be accessible while wearing gloves too.

The new action button on the side lets you start a workout, set a waypoint, or switch to a different leg of a triathlon. Apple also designed a new face for the Ultra called Wayfinder that includes a compass along with specific location information. You can also switch to an evil-looking all-red night mode that should be easily visible at night, and the 2,000 nits display helps with that as well. That’s all aided by dual-band GPS, which Apple says is more accurate and reliable than its previous single-band technology.

Speaking of bands, Apple developed three new ones for specific purposes to ensure it stays put: Ocean, Trail, and Alpine. Each has a custom locking mechanism to make sure it will not move, even in extreme conditions. Apple says the watch will function in temperatures as cold as -68F, as well as climates up to 130F as well. Since adventuring can take a while, its battery lasts up to 60 hours. It will cost $799 and only comes in GPS and Cellular. 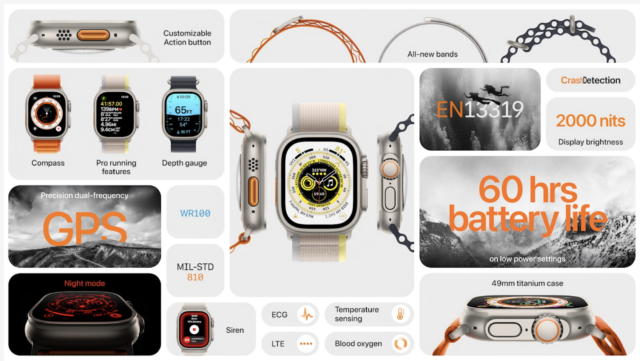 Apple has added two new features to its iPhones that could save your life in certain scenarios. The first is called Crash Detection, and it’s self-explanatory. By using the sensors in the phone, it can detect if you’ve been involved in a car accident and automatically call 911 for you. The phone will show a prompt asking if you are okay, and if you don’t tap it, the phone will atomically dial EMS and notify your favorite contacts. It’s not clear how long you have to make this decision. 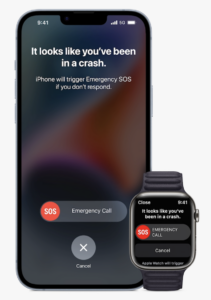 Additionally, Apple has added a way for you to call for help via satellite if you’re without cell service. Once you activate the signal the phone will tell you where to point it in order to communicate with a satellite above. From there, it will relay the signal to stations on the ground, then to infrastructure it’s created to send the signal to local authorities. This could be a godsend to folks trapped in the wilderness, as most of us have experienced the panic of being somewhere without cellular service before.

Apple says it will offer two years of this service for free for any purchase of an iPhone 14. However, it’s not clear what it will cost beyond that period, and older phones (even the iphone 13) won’t get it. Both crash detection and satellite rescue are offered on all iPhone 14 models.

At the event, the company also launched the Apple Watch Series 8 along with an upgraded SE model, as well as enhanced AirPods Pro. You can watch the event in its entirety right here.