A Nearby Super-Earth May Be Suitable for Life The number of planets in just our galaxy is unfathomably large, but so far, scientists have only confirmed about 5,000 of them. Even this small fraction of the total has revealed intriguing worlds, some of which might even support life. You can add two more to the list today. An international team of astronomers, led by astrophysicist Laetitia Delrez from the University of Liège, has confirmed two new super-Earth planets in the habitable zone of a star just 100 light years away.

The team went planet-hunting based on data from NASA’s Transiting Exoplanet Survey Satellite (TESS), which scans the sky for evidence of exoplanets transiting in front of their host stars. These observations need to be verified, though, and that’s where the University of Liège initiative began. The researchers turned the ground-based SPECULOOS (Search for habitable Planets EClipsing ULtra-cOOl Stars) telescopes toward a star known as LP 890-9 (also known as TOI-4306), hoping to confirm an exoplanet. They found two.

LP 890-9 is notable not only because it’s close (in astronomical terms), but also because it’s a very cool red dwarf star. It’s the second coolest star confirmed to have a planetary system after TRAPPIST-1. That means LP 890-9b and LP 890-9c (also called SPECULOOS-2c) are potentially habitable even though they orbit very close to the star. LP 890-9b completes an orbit in just 2.7 Earth days, and LP 890-9c is a bit farther out at 8.5 days. Both are well inside the orbit of Mercury when compared with our solar system. 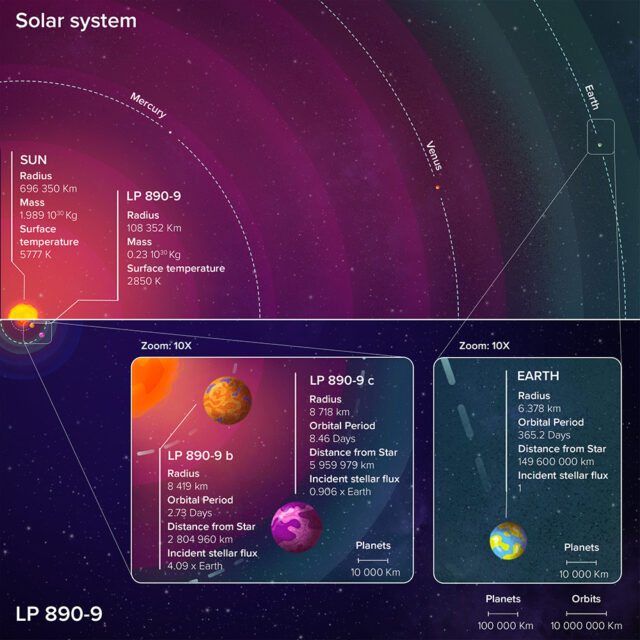 The planets are roughly the same size, about 40 percent larger than Earth. That puts them squarely in the super-Earth category, which means they probably have rocky surfaces rather than a thick gaseous envelope like the small-ish gas giants Neptune and Uranus. In the case of bonus exoplanet LP 890-9c, it appears to be in the star’s habitable zone with temperatures that support liquid water—it’s “potentially habitable,” in the words of the research team. These worlds would be subjected to piercing radiation and frequent solar flare effects orbiting so close to a star, but wherever there is water on Earth, we find life.

The researchers cite the solar system as one ripe for follow-up observations. A nearby solar system with two closely orbiting rocky planets, they say, is an ideal target for the James Webb Space Telescope, which just recently returned its first direct observations of an exoplanet. Its sensitive infrared optics might be able to help characterize the atmospheres of these exoplanets, if indeed they have any. That would tell us a great deal about an increasingly common category of alien worlds.